I shall start at the beginning!

Last week I got a phonecall from my sister telling me to expect a call from Persil as she had nominated me for the Mini Miracles competition (about mums who do mini miracles everyday with their kids) and apparently I was in the final!

Phonecall came from Persil (well, PR company on behalf of Persil) telling me I was a winner and had won…

MEET KIRSTIE ALLSOPP FOR LUNCH IN HER HOUSE!! 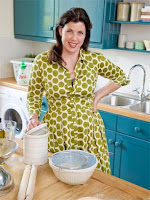 So, Tuesday came and I spent 7 hours with my bottom going numb on a train down to Honiton – near Exeter, a taxi was picking me up to take me to Woodbury park Golf Club which is where I was to spend the night. It was still all surreal at this point until another mum who was at the train station tried to nab my taxi and we both realised we were heading to the same destination as we were both Miracle mums!! We shared the cab and chatted about how we got nominated, what we did (shes a CEO on the board of Starbucks!), she had 2 little girls with her and they were both making me pine for my own kids (hubby was on duty with them all as he said i deserved the night away to relax!) 🙂

We got to the golf club and checked in then were met by the lovely PR girls (blonde hair, pretty and skinny – jealous.. moi??) who took care of everything including dinner and wine. This is where all 5 of us miracle mums got to talk to each other and find out that we all actually have a LOT in common!! Whether it be competitions, blogs, twitter or just enjoying being a mum, we all realised that it was pretty special to be credited for something we all seriously enjoy 🙂
We ended up taking a bottle of wine back to one of the girls rooms and it was seriously as though we had known each other forever – we laughed, cried and finally got to our own rooms a little after midnight!

Up early the next morning for breakfast and picked up via taxi to head out to Kirsties home. We pulled into her drive, boy do i love the crunch tires make on pebbles, and marvelled at the grandeur of the house….btw you could have fit my entire home into Kirsties kitchen!!

Kirstie came out to meet us all in one of her trademark dresses and looked every bit the domestic goddess she appears to be on screen. 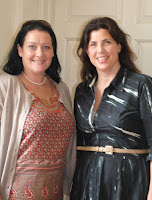 After shaking hands and asking everyones names she ushered us into her home and we were offered a cup of tea/coffee before being told all about the house and the renovations etc. This house is actually her husbands and is HUGE – im talking 14 bedroom, put the kids at one end of the house and need a tracking system type HUGE! They even have a priest hole in their wardrobe floor! Nothing was off limits, we strolled from room to room, up to the attic and all through the bedrooms (including Kirsties own!) – the boys, Bay and Oscar were little stars and went to grab torches etc so we could peer into the priesthole and spy around little hidden corners! lol

When we were finished the tour (sorry for the lack of pictures but its a home and didnt feel right to snap pics of personal belongings etc – plus there was a professional photographer there anyways so when i get some of those through i will share) we headed downstairs again to have a glass of champagne and take pics of us with Kirstie etc.

We all cheered for photographs, sipped champagne and decorated with decoupage – just the 6 of us around the kitchen table, laughing, talking and putting the world to rights.

Lunch was next and boy were these cakes pretty!

As well as lots of sandwiches, homemade salsa, scones and cream were fresh berries, pretty flowers and water spiked with mint leaves.

True to form it was served on mismatched china and ‘found’ items, old silver forks, spoons and perfect linen napkins – we even got to look in the drawers at the Christmas napkins Kirstie made on the last show.

Above her sideboard was the most amazing picture made with buttons…well, you know my love of buttons!! I asked her if it was ok to take a photograph to share…

…how fab is that and it was MASSIVE! I might make something similar but on a smaller scale…much smaller! lol

After lunch the taxis arrived so after a round of hugs, signed pics and questions about what was the next show like etc we all departed with our pressies of Cath Kidston bags, (did you know Cath is Kirsties cousin??!!) beautiful blue pot plant and our decoupage goodies. Oh that crunch of tires on pebbles again will never get old! 🙂

So, thats my story of how Debbie met Kirstie…Im now sat waiting to do an interview with a newspaper and plotting on how I can get my own TV series! I think I could get use to this!! 😉

(HUGE, MASSIVE thankyou to my sis Kelly as none of this would have happened without you – i got her to sign one of the photos above where shes in the green dress for you!)