My girls go crazy for anything that is collectable, I’ve previously mentioned Num Noms and Shopkins…well now meet the Tsum Tsums! 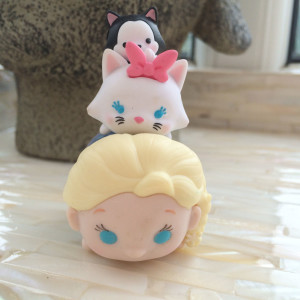 The name is derived from the Japanese verb tsumu meaning “to stack”, because the toys are designed to stack on top of each other, forming a pyramid shape!  The Tsum Tsums are based on popular Disney characters and I can see there being some firm favourites here already with the white rabbit from Alice in Wonderland and Elsa!

Although Evie has claimed them all as her own, Amelia loves waiting until her big sis is at school then getting them all out and lining them up to watch TV with her!  They are the ideal size for her little hands and she loves nothing more than carrying them everywhere…she always knows when her sis is due back in and has them back in place so there is no trouble! lol

The prices vary from £5 to £15 for the blister packs of the plastic Tsum Tsums.  Of course there are the soft squishy versions too which are available in small, medium and large which are generally between £4 and £20 depending on which ones you go for!

I know for sure my girls have some on their Christmas lists!

Exploring With Poppy and Blacks! | Review

Fun At Home With Funko | Review