Never Underestimate the Power of a Nagging Hubby!

Now, you may have looked at that title and thought what the heck but let me start at the beginning…

For the past year I have suffered with a series of issues that I have brushed off or minimised.

Bottom problems: oh it must be something I ate. (Hubby – Go to the doctors and get checked out please).

Stomach problems:  wonder if im having issues with dairy. (Hubby – Did you make the doctors appt?).

Chest pains:  It’s just the way i was lying in bed/sitting while i was working. (Hubby – Go to the doctors ffs!)

ME: Meh maybe I just need a good fart (wisdom passed down from my mother since we were little – everything boils down to wind and 9/10 a good fart really does make you feel better! TMI Sorry!)

Things started to get a little more serious around 2 months ago when I woke up with searing pains in my chest and back, the kind of pain that wakes you is never a good one.  Sitting seemed to ease it a little and everything is solved with a couple of Ibuprofen and a box set on Netflix right?!

Continued pains, stomach ache and chronic runs made me head to the doctors last Monday (actually it was hubby threatening to drag me there like an insolent child that made me go – Im not really into public displays of affection) where they suggested blood tests, told me to take a stool sample and hinted I might be suffering from IBS.  (Do I even need to type the ‘I told you so’ from hubby – no, thought not!)

Wednesday night was when I realised just how serious things could get!

Having gone to bed at 8pm with slight pains in my chest but nothing major enough to cause huge concern I soon fell asleep, however when I woke a couple of hours later feeling as though the world was on my chest and John Cena was trying to get out from inside my rib cage I knew something was amiss!  A trip to the loo to throw up proved pointless and the pain continued.  Not wanting to wake anyone else I headed downstairs and ended up crippled in pain on the sofa unable to even sit without searing paints around my ribs and back, mainly on the right hand side.  Having watched multiple hospital dramas from ER to Greys I knew it wasn’t a heart attack (…did you know you get a PHD if you have watched at least 8 series – no, well you should?!) but decided to ring 111 just to check it out. 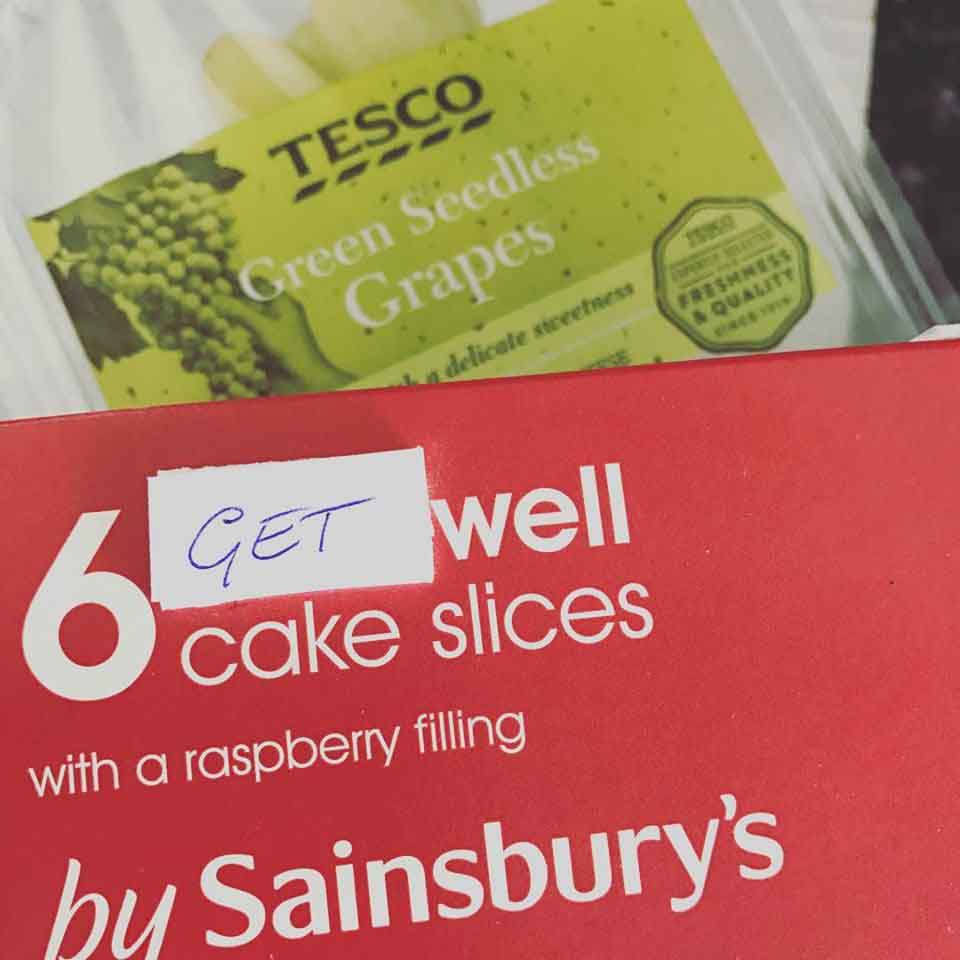 Post hospital gift from Jake (14) bought with his own money, bless!

Best decision ever as she heard the fact I could hardly breathe through the pain and dispatched an ambulance.

Fast forward 10 minutes of hubby waking son (18) to go with me and the ambulance men turning up (one was a blogger who blogs about rambling and hill walking – hello if you found me!)  I’m sure it was a distraction technique to try and get me to spill the beans on how I was doing as a full time blogger and what I worked on etc but i was thankful for the small talk while they checked my vitals and proclaimed that all my stats were on par with a 21 year old (Gee, thank you!)

After sucking on gas and air in the ambulance for the 10 minute ride to hospital, getting no where and holding onto a full sick bag we arrived at the hopital where I was hooked up to a drip and given lots of meds to ease the pain.  Got to love modern medicine and the NHS!

By this point it was 5am and Scott was starting to look as bad as I did, the lack of sleep was catching up but I had no time to nap as I was whisked straight down for an X-ray.  With no huge queue that was done rather quickly and I was returned to the side ward to await results.  Scott kept plying me with polysyrene cups of water and going on a wander to find vending machines, fresh air, phone signal – I’m sure it was just an excuse so he didn’t have to keep making small talk with his drowsy mother!

Next up came an ultrasound which long story short showed I had gall stones and other issues to the point where the doctor was in the room when I got back and he said we needed to get it sorted now.  Signing my life away at that moment I would have been happy for them to hollow me out as long as it promised that the I had experienced didn’t return, I realised just how serious it was when the surgeon followed me to the ward and told the nurses that he didn’t care how much paperwork was done, i was to be booked in and down in surgery in 5 minutes, that was all he wanted to hear!

I have heard many people say they are scared of going under general anesthetic but at this point i was just happy at the prospect of closing my eyes for a while and breathed deep into that funny smelling mask!  Waking to the soothing tones of a nurse rubbing my arm and telling me to breathe deeper it was all over in a flash.  Done.  Pain gone (hopefully)

Flowers from my lovely mummy!

The nurse said they had a couple of issues getting me back to breathing properly, kept rubbing my arm, looking into my eyes and said she would keep the morphine topped up – I was happy to believe this was an angel as I kept dozing back off!

Keyhole surgery isn’t one hole the size of a keyhole! (duh!)  I have 3 points which have been stitched, one under my breast bone, two down my right hand side and an incision in my belly button.  Coughing is a nightmare and please don’t make me laugh – it will end in tears!

Thankfully everything went really well and they removed my gall bladder with ease.  When the doctor came round the ward he said we were lucky to get it when we did as it was really nasty and another who looked at the image in my file said they can usually tell what the image is but it looked like my gall bladder had burst.  No wonder I was in so much pain and maybe I wouldn’t have gotten to the stage it did if i had listened to hubby after all.

Anyways, I am now on the road to recovery, need to get my dressings changed again this afternoon and stitches out next Friday so until then I am following hubbys orders and taking it easy.  He keeps giving me that look of ‘told you so’ but as long as he is looking after me and taking the load off I will allow him his smugness!

Gentle hugs from this one is helping lots, the kids have been amazing!

Ladies, listen to hubby, sometimes they might just be right!

A Large Family Christmas – (how to hold your sh*t together when all around are losing theirs!)

Our Bedtime Routine with A Co-Sleeper!

Animals Inside Out – A Body Worlds Production