Clothes and cars – a road trip through fabulous fashion!

In the days of vintage motoring, women were little more than decorative ornaments. Swaddled in furs and rugs against the elements, their extravagant Edwardian hats pinned firmly in place, they could only wait in the passenger seat as the driver struggled to crank-start the car. 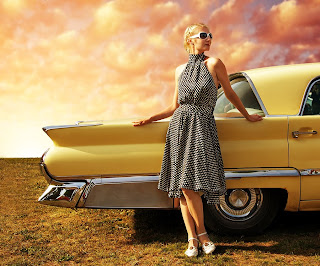 After 1912 everything changed with the invention of the self-starter. With driving now a matter of brains rather than brawn, women took to the road in increasing numbers. As motoring developed throughout the years, so too did driving fashions.

The widespread use of cars began in the 1920s and helped to empower women: this was part of a general trend that saw them cutting their hair and shortening their skirts.

Flapper fashions were daring – with the dropped waistlines and figure-skimming cut – in contrast to the corsets and bustles they replaced.
Short coats, low-heeled shoes and boots, neat cloche hats to keep the hair in place – all these were stylish essentials for the woman at the wheel.

During World War Two practicality became the order of the day. With fewer cars on the road because of fuel shortages, and fewer men to drive and service them, women needed to get to grips with what was under the bonnet.

Faced with maintaining a greasy vehicle, the new female workforce ditched skirts in favour of sensible trousers or overalls. Fabric shortages led to a new style of skirt: knee-length and functional. Fitted jackets and peaked caps had a uniform air, reflecting the severity of a nation at war.

The post-war years were a glamorous reaction to the austerity and shortages imposed by six years of fighting. Cars became bigger, as well as more plentiful, luxurious and extravagant.

Women’s fashions bloomed again, with Dior’s ‘New Look’ perfectly capturing the femininity that had been cast aside in the war effort. Nipped-in waists, full skirts billowing with metre upon metre of fabric, high heels and costume jewellery were all an expression of the fabulous fifties.

The convertible was the car of the day, a challenge to styled hair and make-up. Fifties women responded in glamorous style, with chic headscarves and movie star sunglasses.

The fight for equality and the subsequent increase in the number of career women had its own side-effect on fashion. Women who wanted to be taken seriously in the last two decades of the 20th century adopted the trouser suit, which became the outfit of choice for business wear. In their leisure time they opted for jeans, like their male counterparts, as a relief from the formality of the working week.

Today’s women have more choice than ever before, both in the cars they drive and the clothes to drive in.

Being well-dressed at the wheel may be important but remember, whatever your style, you’re not fully covered unless you have car insurance that gives you the peace of mind you need.

Author Bio:
Jan Chapman writes on a range of topics including family matters and car insurance. In her free time she enjoys cooking, the countryside and trying to train her large dog.
Facebook Comments

The most divine cupcake frosting EVER!!